Shared governance, “Are you ready” promotional campaigns, media receptions, enhanced accessibility, reassurance… On 26 August at 9:30 a.m. at the NCT offices, New Caledonian businesses involved in international tourism will together sign a new “Relaunch Destination Contract”. Local institutions and companies will thus officially commit to supporting the multiple actions to revive the attractiveness of our archipelago for tourists and to work together to support the gradual resumption of foreign passenger traffic.

In order to gradually win back tourist flows lost during the covid crisis, revive the dynamic of cooperation between local players, rebuild the attractiveness of the destination by pooling resources and better adaptation to new travel trends, New Caledonia Tourism has brought together the main local players in the sector around a new special contract to “Relaunch” the destination over a three-year period.

A cooperative way of working underpinned by contracts per market, previously proven to be very effective in supporting the attraction of New Caledonia, particularly in Australia & New Zealand from 2013 and Japan from 2017, with a 51% increase in Australian tourists, +62% in those from NZ and +37% in those from Japan over the 5 years prior to the crisis.

This time, hoteliers, carriers, promotional organisations, institutions and receiving agencies will make a concrete commitment through five main lines of action:
• Making access to the destination easier
• Synchronisation of commercial and promotional actions
• Creation and enrichment of the tourist offer
• Shared media and reseller invitation
• Health and commercial insurance for travellers

This very broad agreement thus provides for the organisation of regular follow-up meetings between all the signatories, the establishment of sufficient or protected transport capacities for foreign passengers, the further development of interconnections between international and domestic flights, the launch of vast international promotion and sales campaigns (see “Are you ready”) integrating the synchronised promotional offers of all the signatories, the regular sharing of statistical data in order to feed a future Caledonian Tourism Observatory, the facilitation of media coverage and the training of resellers by organising stays given by participating service providers, the development of the prepaid mobile telephony/internet options for tourists and passing business customers, etc.

Now that the Government of New Caledonia and those of our source markets (except Japan) have lifted most travel restrictions related to the management of Covid, the basic conditions are finally in place for a resumption of international tourism on Le Caillou. What remains now is to push on and reinforce the promotion of New Caledonia abroad in the face of increasingly strong international competition and with new expectations from travellers. This contract and the actions resulting from it therefore constitute a first essential response.

NEW INTERNATIONAL PROMOTION CAMPAIGN
“ARE YOU READY FOR NEW CALEDONIA?” 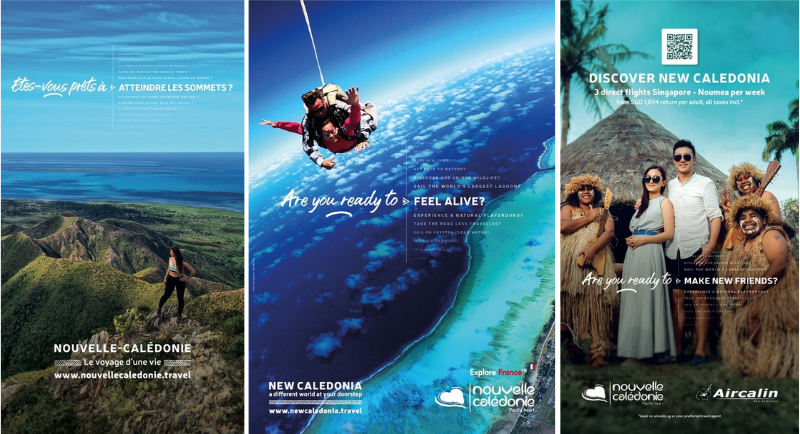 Since July in Australia, New Zealand and Singapore, and from mid-September in France, then in Japan, NCT has started to roll out a new promotional campaign called “Are you ready for New Caledonia?” ». Its objective is simple: to show all the diversity of the destination with a carousel of 13 unique experiences and to create an urgent craving for travel among foreign customers.

This multi-channel campaign is available in all forms (web and print), and is very apparent on posters in metro stations and shops in Singapore, on social networks and on the radio in Australia/NZ, and soon on the web and French on-demand TV. Although still in the course of deployment, it has already reached more than 9.5 million Internet users!

See the long version of the ad: https://www.youtube.com/watch?v=tfTNNxLhkSs

With the support of the participating destination contract service providers, several influence (“Marine Lorphelin ♥ NC”, Japanese and Singaporean influencers) and PR actions will complete this plan.

New Caledonia Tourism (NCT) is an economic interest grouping (EIG), making connections between its institutional partners and professionals in the sector, to ensure the tourism promotion of New Caledonia at the international level, under its brand ” New Caledonia, Pacific Heart”. Founded in 2001, the grouping, now under New Caledonia government authority, is based in Nouméa, but also has representation in Australia, New Zealand, Japan and metropolitan France.

You can find out more about which cookies we are using or switch them off in settings.

New Caledonia takes to the stage in Singapore at the “vOilah!”...

The ‘Rendez-vous in New Caledonia’ workshop returns to facilitate the international...

Kenzo Tanaka - 1 November 2022
0
On 10 November, the sixth edition of the ‘Rendez-vous in New Caledonia’ workshop, organised by New Caledonia Tourism with the support of Aircalin and...

Kenzo Tanaka - 3 October 2022
0
From October 2022, New Caledonia will reopen its maritime borders for cruises. A first ship, the Pacific Explorer of the Australian company P&O Cruises,...

This website uses cookies so that we can provide you with the best user experience possible. Cookie information is stored in your browser and performs functions such as recognising you when you return to our website and helping our team to understand which sections of the website you find most interesting and useful.

Strictly Necessary Cookie should be enabled at all times so that we can save your preferences for cookie settings.

If you disable this cookie, we will not be able to save your preferences. This means that every time you visit this website you will need to enable or disable cookies again.